The middle school's project is a bit like Niou's, a teacher at Ban Na Teui. Of course, it was launched for the 120 schoolchildren, but it is also to thank an exemplary woman for her commitment. The rapid construction of the dispensary gave us the courage and ambition to embark on this new adventure.

Origin of the project

In 1995, Niou was a primary school teacher. She actively participates in the work, cooks for all the "falang" (French people) who come regularly, and helps all organizations with the construction and inauguration of the new primary school.

In April 2001, the school year began in the new building. But Niou is appointed to the middle school that has been patched up with the boards of the primary school... A little bit frustrating, isn't it? 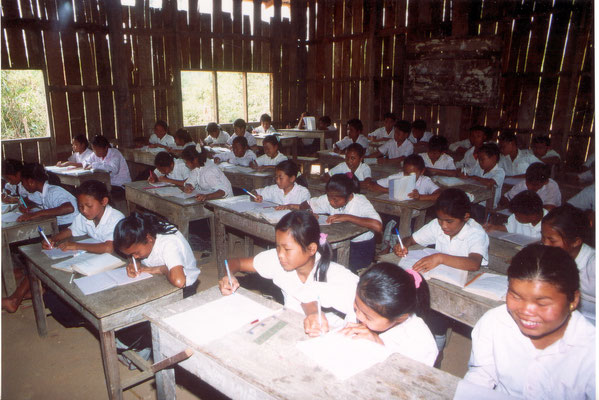 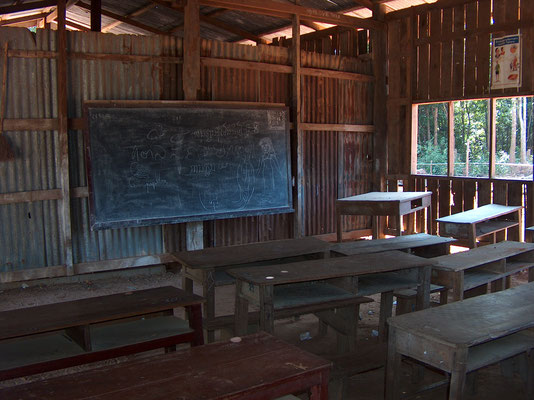 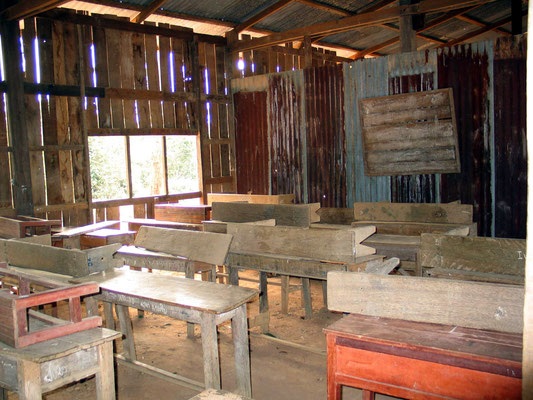 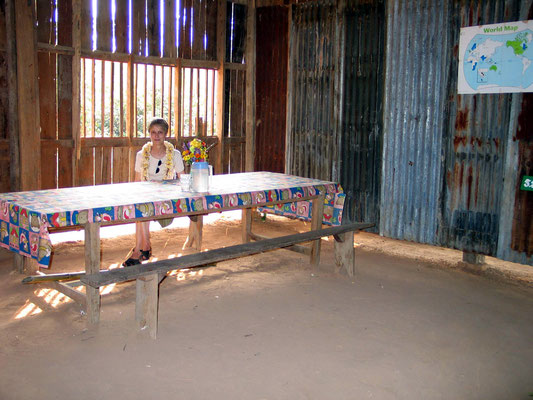 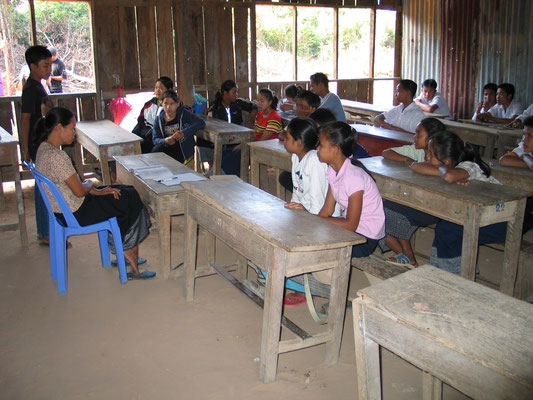 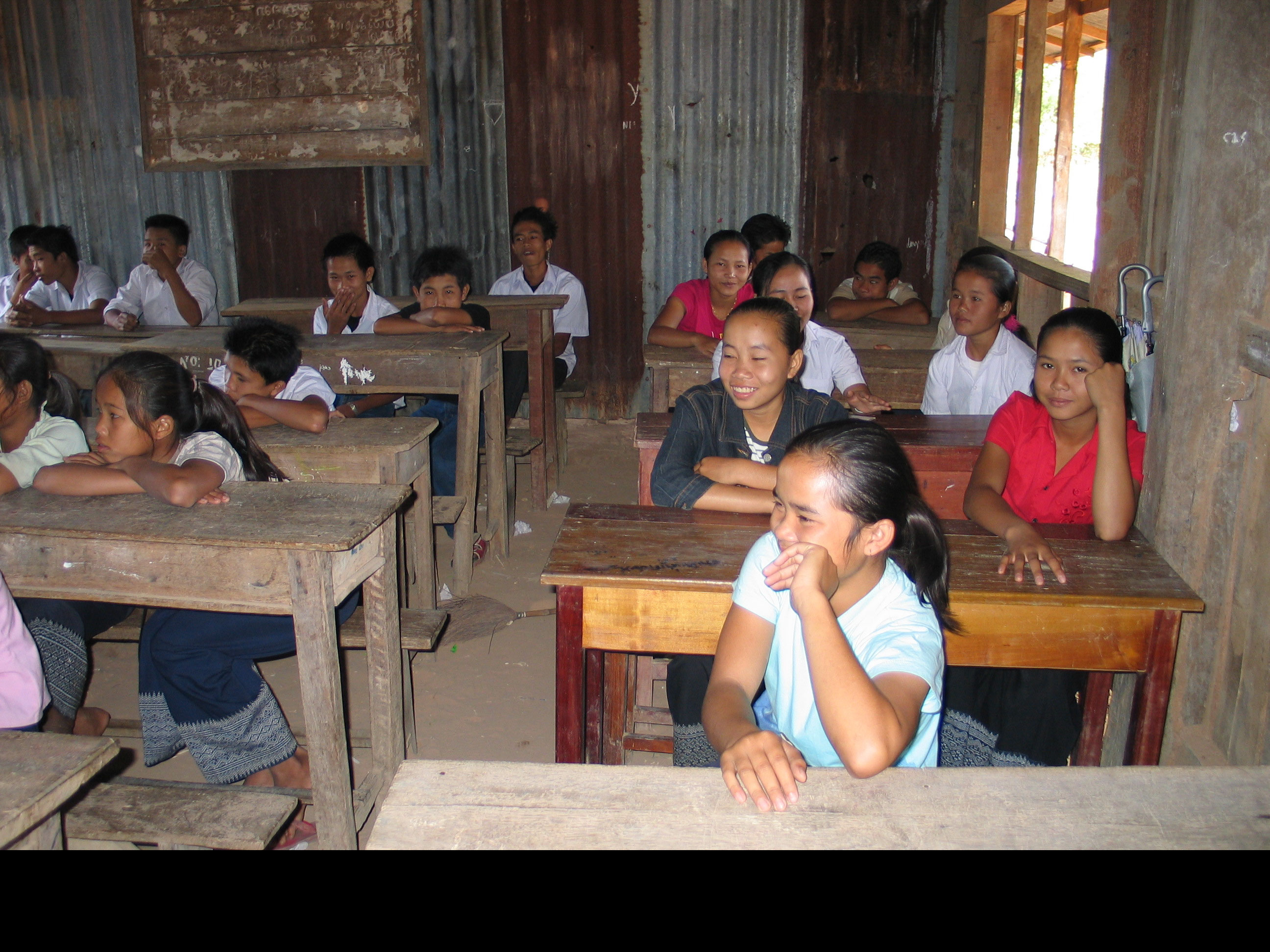 February 2004: the idea is gaining ground. On the occasion of the inauguration of the dispensary, Bé announced to the village that a "real" school would be set up next to the three classes of the dilapidated wooden barracks that served as a school. Not only is the school dangerous, but it also lacks toilets and it is in the neighbouring coppices that young people will go to their natural needs.

October 2004: start of work. Bé, two dentists and six "long noses" (Europeans) come to treat the village children. It is on the occasion of the first medical mission that we buy the materials and that teachers and students prepare the site.

It is for this youth, to preserve the values of this so endearing people, that we are acting, with you, thanks to you, so that Niou and her students can sit in a beautiful classroom, of which she dreams so much.

The village craftsmen, with the occasional help of the villagers, built the entire building by hand, both for the foundations and for the concrete. No mechanical equipment was involved. Thus, by giving work to the locals, we have helped them to improve their daily lives in two ways.

It was inaugurated in March 2007 with a blessing from the monks, a baci for all, and a great popular festival to the rhythm of the lamvong.

It is now a 44 m long and 9 m wide building with 4 classrooms, an office, a meeting room, a small library, a fence, a gate, and of course an adjoining toilet. 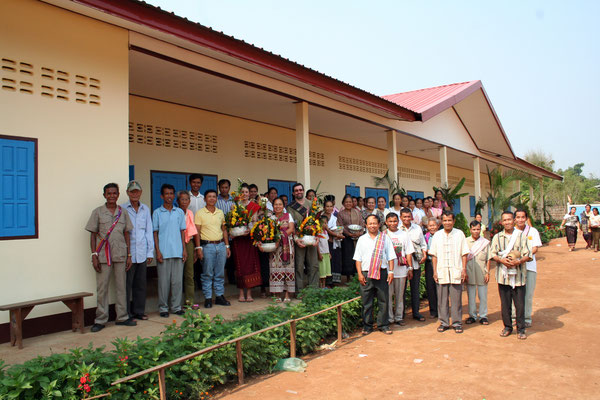 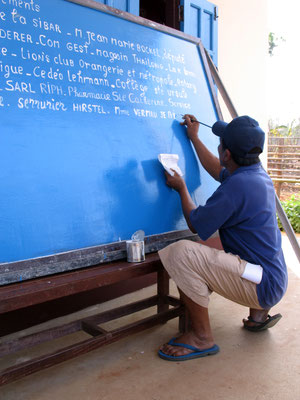 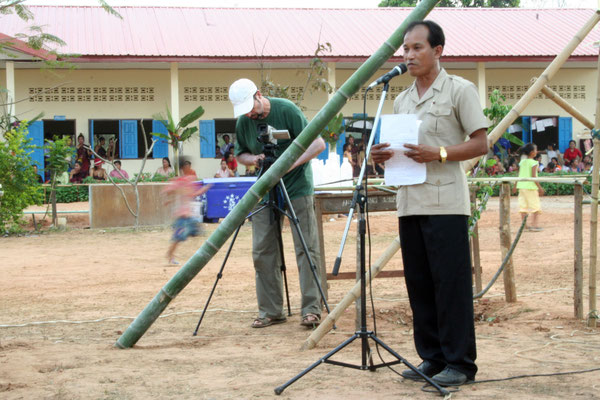 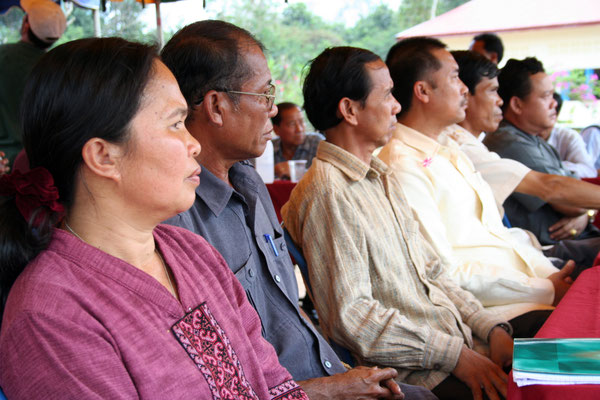 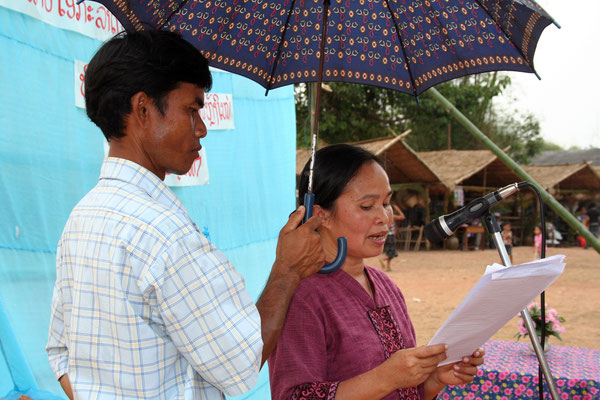 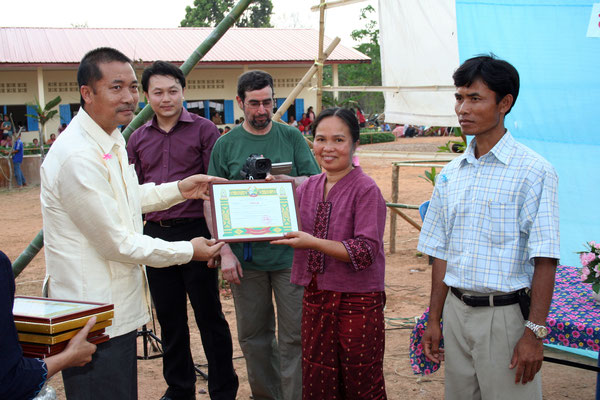 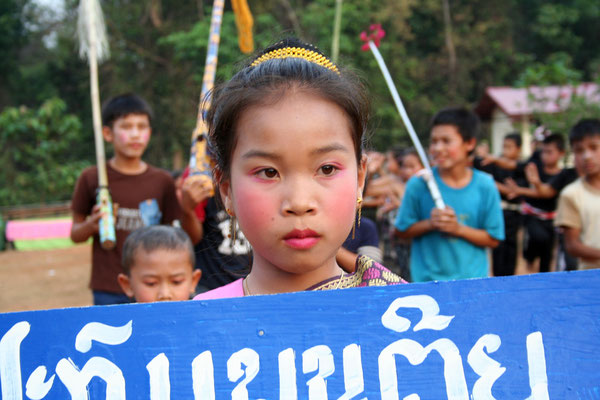 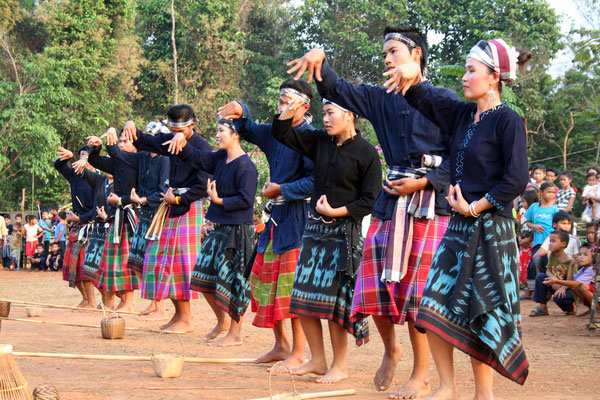 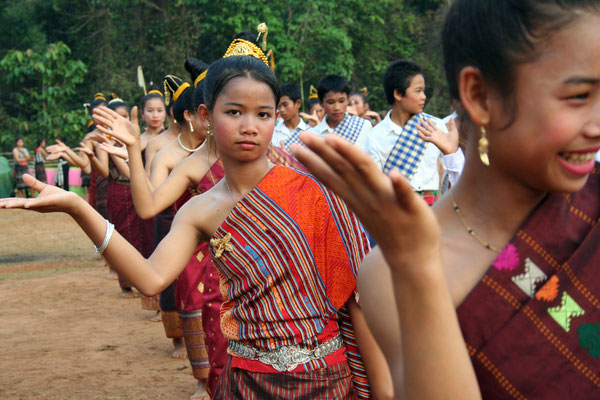 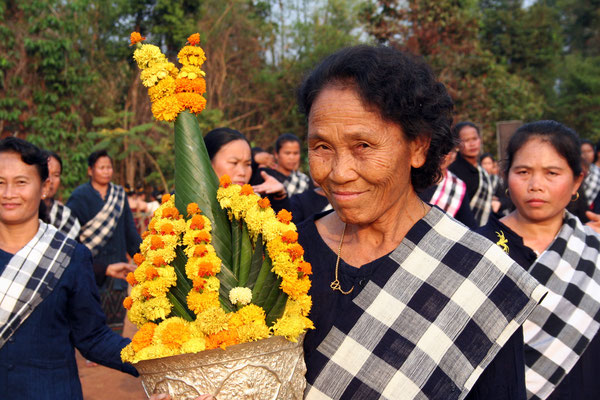 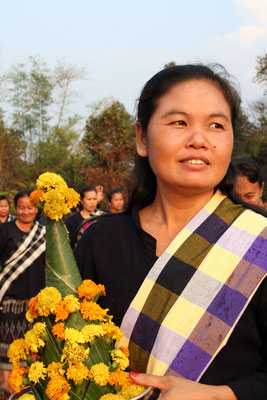 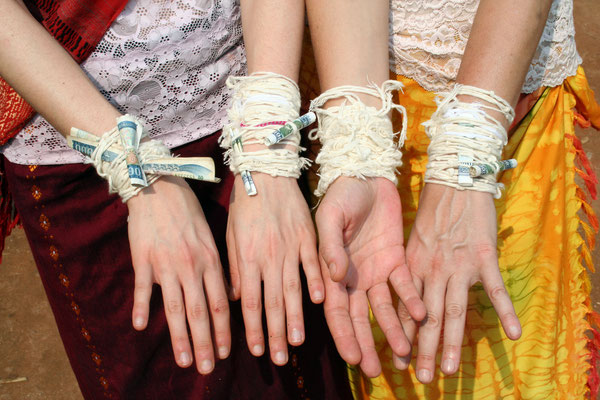 Laotian society is synonymous with mutual help and solidarity, and when we see schoolchildren, girls and boys, teachers in the lead, tearing down trees, planting stakes to define the future building, transporting and levelling the ground, it leaves us a little perplexed... Imagine our schoolchildren, as demanding as "consumers" painting doors, windows or walls of their classroom or mowing the lawn and cleaning the surroundings of their dear "Bahut"... Amazing but comforting!

Here you do not dream when you see the students join their hands, wear them at face level, tilting their heads, to respectfully greet their teacher when they leave class...

Introduction to french for villagers

After the visits of many groups of "falangs" (French people), we thought it might be interesting to provide the young and not so young volunteer villagers with the basics of our language. The objective is to provide "a plus" for teenagers for their future professional life.

It was in March 2009, with Sontha, a former Russian and English teacher living in the village, speaking very correct French, that the idea was put in place. 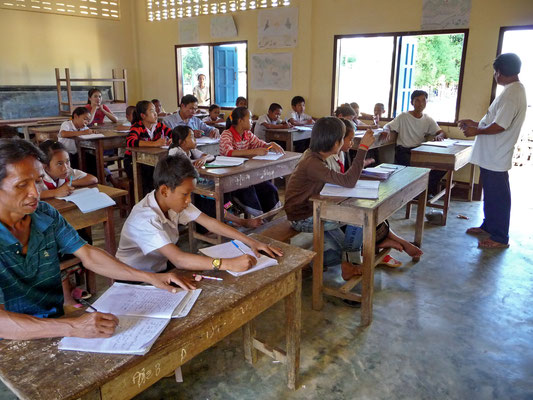 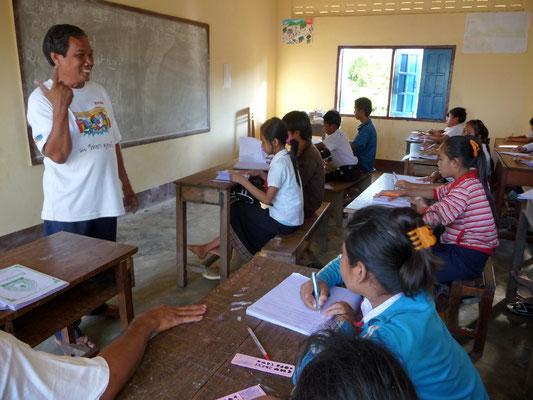 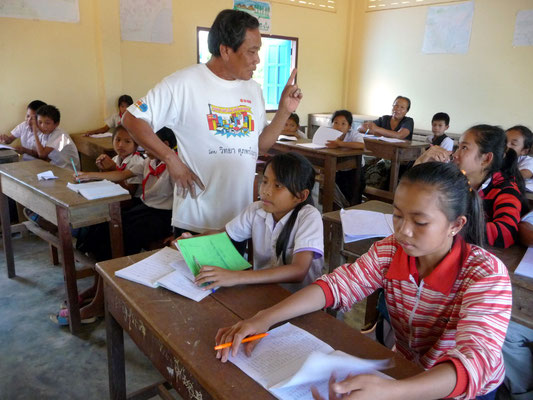 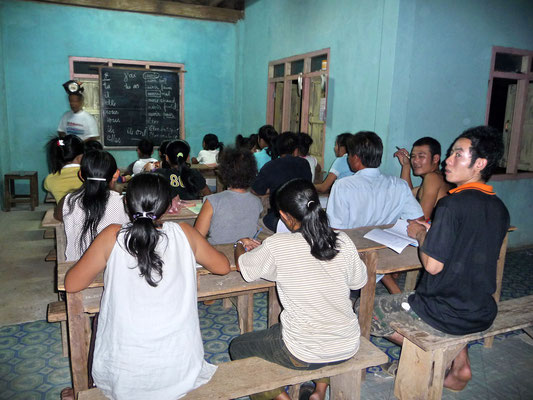 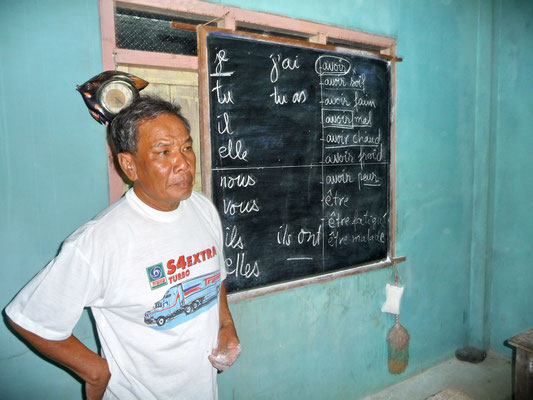 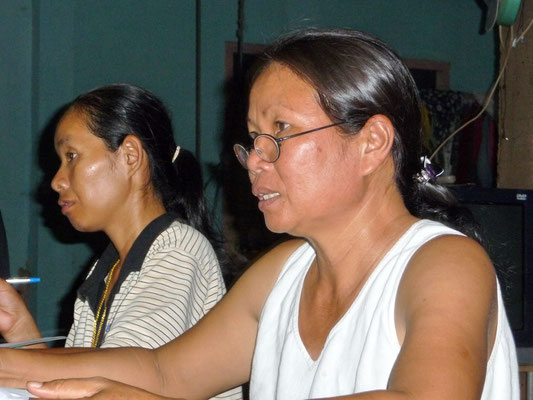 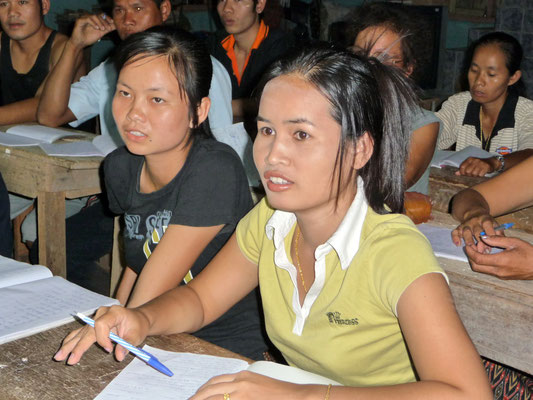 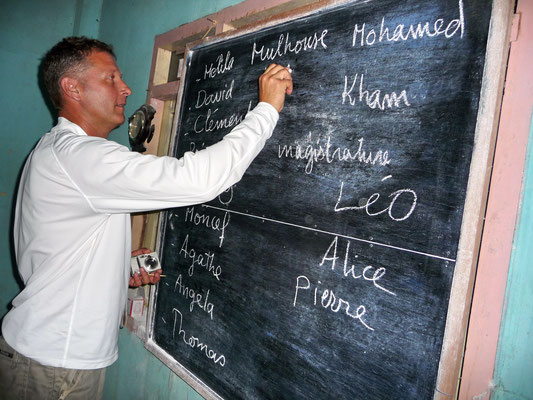 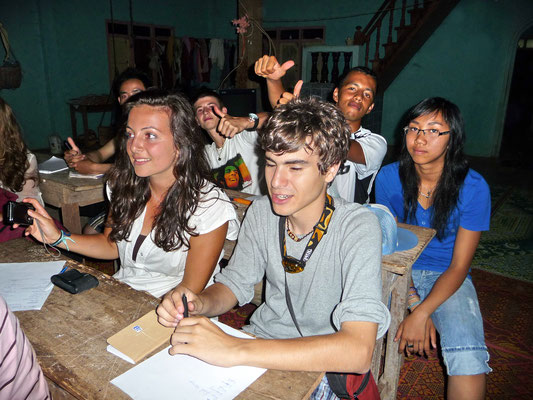 After 6 months of operation, due to a lack of budget, the other projects being a priority, we had to interrupt the teaching of French in the village.